…or at least collaborating with it to grow things

Last year I planted a portion of the spring plants I started from seed, not being sure if they would survive or not.  In retrospect it seemed timid and haphazard.  This year, I conducted a couple of experiments, albeit not carefully planned, that gave me confidence to plant all the plants at once, something I needed to do to make room for starting warm weather plants, like tomatoes and peppers, in the house under the lights.  I had set March 5 was planting day for the plants I started from seed, but on a whim I was later glad for, I set out one lettuce and one broccoli a week before that, still in February.  I felt completely cavalier putting plants out before March, but I thought, if I lose them to cold weather, too bad, but it’s only two plants.  Let’s see what happens.  The weather that week got very cold and very windy.  The temperatures were in the upper twenties several nights.  At the end of the week they were still alive, still growing.  If those two hardy souls could survive such a chilly week, I suspected I was safe planting the rest that Saturday. 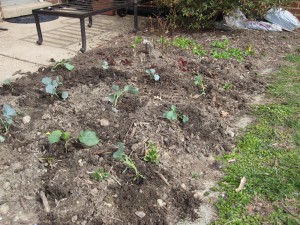 I also had been checking the ten-day forecast every day leading up to planting day.  The weather gurus were predicting no nighttime temperatures lower than 33 or 34.  I thought I’d be o.k., that it was worth the risk.  First experiment: a success.

The spinach and radishes I’d planted from seed in early February were sweetly stretching their little arms up toward the sky.  Because of those few nights dipping into the twenties that week, I covered the spinach in Jones not wanting to risk losing the results of my early February planting coup.  Since Smith was farther away (and I’ll be using it mostly for warm weather plants anyway), I let the spinach and radish sprouts over there fend for themselves: the second experiment.

As if worrying about cold at night wasn’t enough to keep me busy, the days that week were sunny and clear with temperatures in the low fifties.  I fretted, especially while taking my lunchtime walk under the noon sun, that the spinach seedlings at Jones under the plastic would get too hot and succumb.  Because it’s in a community garden four blocks from our house, I wasn’t able to get over there before having to leave for work in the morning.

As with a lot of my worries, everything turned out fine.  Both spinach plantings survived, the uncovered the cold, and the covered warm.

I sling words for a living. Always have, always will. Some have been interesting and fun; most not. These days, I write the fun words early in the morning before the adults are up and make me eat my Cream of Wheat.
View all posts by literarylee →
This entry was posted in Garden: A Love Story and tagged caution, cold, daring, frost, garden, gardening, planting dates, transplants. Bookmark the permalink.