One way or another

Over the last few weeks I’ve been planting warm weather plant seeds.  I was watering the flats one evening and noticed a little green shoot peeking up at me from a place I wouldn’t have expected it.  While planting the seeds, I had apparently dropped one into the tray where the water drains.  Not willing to have its destiny stolen from it, the seed sprouted anyway.  Isn’t that just like a seed to say to itself, “Okay, world.  I’ve got one shot at this, and I intend to make the most of it.  Here goes nuthin’!” 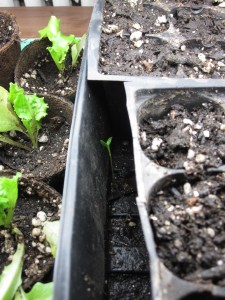 Will not be robbed of its destiny

I rescued the seedling (like it needed my help, in a way; it was doing just fine on its own, at least for the time being), and planted it in a peat pot.  I’m not even sure what sort of plant it is; I’m guessing a pepper. I wasn’t sure how it would fare those first few days properly planted, but now, I’m thinking the little survivor isn’t finished with this world, yet.  In fact, before I write another word, I’m going to take a gander…

…sigh…gone…  It was looking good there for awhile, it really was, but it has truly given up the ghost.  My rescue wasn’t one really, it seems, though the poor thing wouldn’t have survived where it was, either.  Listen:  I have so many healthy seedlings right now and will be planting even more.  I’ve focused on the Anaheim pepper crop since writing about the poor first germination and it’s looking like I may have a dozen of those.  Even the eggplants are looking better.  I absolutely have more tomato seedlings than I need.  Yet, the loss of this noble little seedling hurts.  Why do gardeners continue doing what they do?  So many hopes get dashed, like mine for this seedling.

At least I hadn’t named it yet.  So I’ll push on.  There’s more seeds and hope where that one came from.

I sling words for a living. Always have, always will. Some have been interesting and fun; most not. These days, I write the fun words early in the morning before the adults are up and make me eat my Cream of Wheat.
View all posts by literarylee →
This entry was posted in Garden: A Love Story and tagged alive, Life, living, seeds, sprouts, starting seeds. Bookmark the permalink.