In town late last week I saw the results of an act of man-made destruction.  I was shocked and appalled, completely powerless to do anything to alter what I saw or ignore what the act represented.

City workers or possibly tree removal experts hired by the city had cut down three very large trees that had been growing along Constitution Avenue.  It had happened along the west end of that well known street across from a wooded portion of the National Mall, along the sidewalk in front of one of the lovely white granite buildings that inhabit this alabaster city. 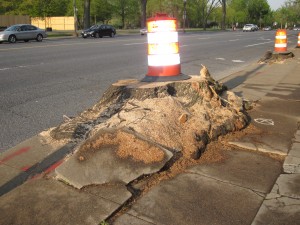 All that was left

You’ve heard people express regret at not making that last visit to a relative before he or she dies?  You wish you had one more picture to help you remember, one last conversation to think back on.  I don’t want to belittle that sentiment by using the same language about a tree, but that’s exactly how I felt.  The stump must have been five feet across, a venerable arboreal specimen.  Besides that, I must have passed it dozens of times since I’ve been walking to my office from a farther away bus stop over the past few months.  Wracking my brain as I passed the stump, I couldn’t remember what it looked like.  Maybe it was diseased or dying.  Maybe it harbored some sort of pests.  Or was its only sin  breaking up the surrounding sidewalk with its huge roots?  Even if that was the reason, looking at the size of the roots and the age of the walk, why cut it down now?

Why couldn’t someone have decided to salvage the tree but re-construct the sidewalk around it?  Too much do we people, lords of the earth, yes, but also its stewards, make the world fit into our boundaries, rather than conforming ourselves to its ways.  Dominion of the natural world should also mean caring for and nurturing it.  I don’t know the whole story of this tree (and three others spaced out over the next 50 feet of sidewalk) and why it was removed, but I worry that salvaging the tree wasn’t even an option.  It certainly wasn’t the final choice.

I was at least glad for the stump, its intricate and fine rings and grain exposed and visible.  There can at least be a remembrance, I thought, for this noble tree whose only sin might have been buckling up a sidewalk.  Imagine my shock the next day when I walked by the site and saw that even the stump was gone, ripped out of the ground, the gaping hole hastily paved over with asphalt!  The result was a wavy, ugly black patch with hardly the trace of even a chip of wood or bit of sawdust.

Even the stump was gone

I don’t know how a city manages its common spaces: streets and sidewalks, trees and parks.  I can only guess at all the complexity.  I suspect and hope that the asphalt is temporary, soon to be replaced with an attractive concrete sidewalk.  I also hope there was a reason to take down the trees and leave an open swath along an otherwise tree-lined portion of this wide avenue in a touristy part of town.  I hope these things because I am a part of this city, this society, this world.  I want to believe that something like this is reasonable, that it makes sense.  I’m not sure I want to be content with the removal of a perfectly healthy, venerable old tree just because the sidewalk around it is buckling.  I am getting weary of civilization forcing nature to bend for it, instead of the reverse.  This tree cutting is a tiny image of that.

Also, I pride myself in noticing the world around me, especially since I’ve been writing.  I’m amazed and a little humbled that I can completely miss a huge, vibrant tree I walked by so many times.  The void that once contained the good old fellow will remind me to open my eyes and my mind even more than I thought I was.  Who knows what, or who, is waiting to be seen, encountered, marveled at and understood?

I sling words for a living. Always have, always will. Some have been interesting and fun; most not. These days, I write the fun words early in the morning before the adults are up and make me eat my Cream of Wheat.
View all posts by literarylee →
This entry was posted in Whitecaps on the Potomac and tagged human dominion over nature, nature, noticing, tree, tree removal. Bookmark the permalink.

One Response to I Wished I’d Noticed…