Smith gives me joy right now.  Plants explode from its surface for many reasons.  We’ve had a few good soaking rains over the last days, always excellent.  One good rain is better than two or three manual waterings.  Also, I spread rotted manure in the spring and mulched heavily after plants started to grow.  All the elements are cooperating nicely, neatly, so that now, BOOM, it’s a thick, rich garden.  Part of the wild, wanton greenness of it all stems from me planting things a bit closer to each other than I might have.  Also, I added a seed or two more to each hill of squash because of my (obviously unwarranted) pessimism they would thrive.  Whatever the reasons, it’s growing very well.  Allow me to enlist military terms to describe what’s going on in this garden not two miles from the Pentagon. 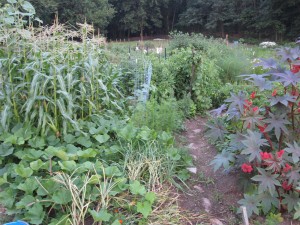 A platoon of tomatoes has bivouacked thickly in their quadrant of Smith, transforming their sector from tidy garden to dense jungle in only a few weeks.  Push the branches aside to see loads of green bomblets, ordinance preparing itself to be catapulted, explosions of sweet summer tomato goodness. 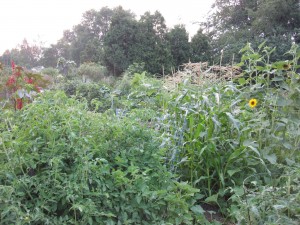 Massed tomato troop camp visible on the left, across from corn artillery 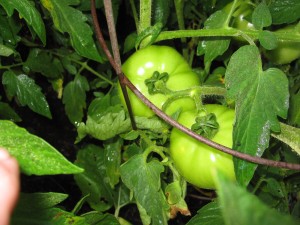 Tomato bombs being prepared for launch (or dinner)

Butternut squash vine reconnaissance troops infiltrate the corn, the carrot and garlic patches, and even spill out into the paths within and outside the plot.  I think every single seed I planted did well, and since I thinned none out, Smith is being steadily, stealthily overrun with a unit of expansive green squash vines. 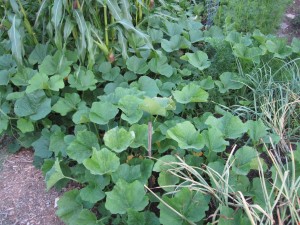 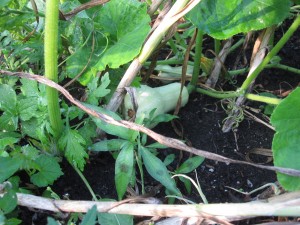 The elite artillery unit, the corn, is erecting ever taller rocket launchers loaded with three or four missiles each, ears filled with sweet, sweet kernels, cluster munitions we can all appreciate.  They are backed up by the 34th Airborne unit, a dozen or more volunteer sunflowers, some soaring ten, eleven, twelve feet into the air, topped with golden bursts of flower. 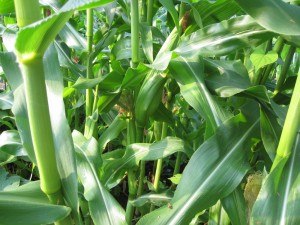 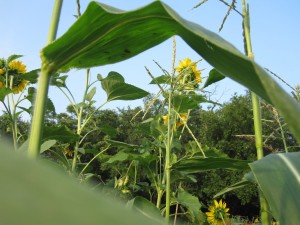 Other volunteer troops, pole beans, are a lush and welcome addition to this green onslaught.  Last year, I enlisted these vining climbers, carefully planned their deployment, set them in ranks, only for them to be bean beetle cannon fodder.  We ate not one, not a single pole bean in 2010.  They gave their lives to the beetles, so the bush beans, those dependable foot soldiers and heavy producers, might live.  This year, I decided against either pole or bush beans in Smith to deny the beetles any more ground at least in my plot.  Somehow, what few of the climbing beans reached maturity (and which I ignored), fell on  fertile soil, next to a pepper plant and among the sunflowers and corn.  Already this year, these viney volunteer troops, have flown under the beetles radars to produce at least four meals’ worth of beans.  Gratifying to this general to see advances in the field I neither planned nor paid for. 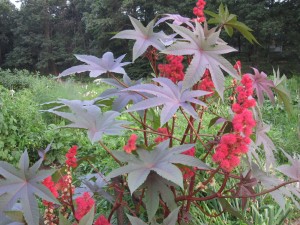 A red lightning bolt in a sea of green

In some ways, the garden could end now and I would be satisfied.  My third year gardening Smith is so far the best yet.  If everything survives the heat, I will reap a tremendous harvest of tomatoes, peppers, squash, corn and even sweet potatoes, a latecomer to the garden also growing very well.  For sure, I have already reaped a great deal of joy and wonderment at the green explosion I’ve detonated.

I sling words for a living. Always have, always will. Some have been interesting and fun; most not. These days, I write the fun words early in the morning before the adults are up and make me eat my Cream of Wheat.
View all posts by literarylee →
This entry was posted in Garden: A Love Story and tagged butternut squash, corn, green, lush, manure, mulch, plants, rain, summer garden, tomatoes. Bookmark the permalink.