Our Own Work / Our Own Sustenance

Posted on September 4, 2011 by literarylee

We’ve been putting some of our harvest by over the last few weeks, preserving it for use this winter and to give as Christmas gifts.  My wife used a slew of the many, many tomatoes that ripened all at once and made fifteen pints of tomato chutney, so luscious, so tomatoey, and oh so good on grilled pork.  We picked pails of figs from her cousin’s two fig trees and made sixteen pints of fig jam.  Few things top homemade fig jam on hot toast or biscuits.  During the recent hurricane, we entertained ourselves by making six pints of bread and butter pickles, so good, so sweet, so perfect.  On Sunday afternoon, I picked about five quarts of beans which we froze.  We wanted to can them, but needed a pressure cooker for that.  We’ve been pickling pecks of peppers picked gradually over the summer, and freezing roma tomatoes by the dozen to use for sauces when the cold winter winds are howling and verdant tomato vines covered with red fruit is a distant memory. 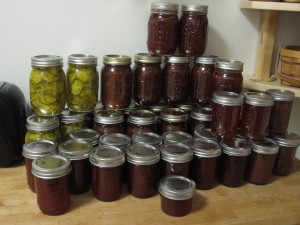 A few days ago she made hot pepper jelly, a taste treat we first discovered many long years ago living in Louisiana.  She used a recipe calling for apples as a natural source of pectin, the ingredient that makes jelly jell, jam jam, and preserves preserve.  For the figs we used store-bought pectin.  After she had signed, sealed and delivered six or so half pints of jelly, she still had a largish amount of what looked like apple butter.  We tasted it and found it worthy, a mature sort of saucy thick apple mash with a surprise kick.  We canned it too, six more pints of product from the venture.  Don’t be surprised to find a jar of Momma’s Hot Apple Butter under the tree with your name on it.

The chutney, jam, pickles, jelly and apple butter we processed in a hot water bath.  This is a tremendously steamy process that involves bringing a large pot of water to a boil, then lowering sterilized jars filled with whatever it is we’ve just made into the pot so that the boiling water rises about an inch above the tops.  I don’t understand how submerging jars (closed with those special canning lids with separate rings to hold them down) makes them sealed.  After we remove the jars from the water, one by one the lids get sucked in, I suppose, by a vacuum the heat’s created.  I love the pop, pop, pop of the lids after we’ve set them on the counter.

We used this canning process because we intend to give some of our bounty away and want to be able to trust that it will be well preserved and safe to eat.  We also are learning how to be self-sufficient, to grow, prepare and preserve our own food to eat later while the garden is resting.

The whole process involves a disappointing amount of shrinkage.  How beautiful, a tray of 30 tomatoes or a couple dozen cucumbers.  Garden fresh anything looks lovely alone and in a large group, even better.  Then you start the chopping and slicing, the cutting and dicing, the throwing in a pot the turning on the heat and what seemed like an immense amount of something looks a lot less.  With jam and jelly that’s actually the goal.  Part of making it thick is boiling off moisture, reducing its volume.  Still, seeing the beautiful fruit and vegetables loose their bright color, their shape and size, even for a good cause, makes me a little sad.

The heat part of this preserving venture, both in the cooking and in the preserving, is important.  I think a significant element of concocting food, maybe a healthy chunk of any transformative process, is heat.  Maybe wielding the flame to change produce into a form that will last is part of our human birthright, part of how we subdue the earth, what we do after we’ve nurtured plants for eating.  We husband them for later and are nourished.  We survive while the garden is bare.

When the task is finished I love harvesting several bushels of satisfaction, seeing rows of jars filled with good things.  I am grateful to have found a way to become a part of a vast and ancient process, growing food, harvesting and producing it, and of course eating it.  It is a rare and precious experience to work directly for my own sustenance, to exert effort, to sweat, to chop and cook and preserve, all that labor translating directly to what I eat.

I sling words for a living. Always have, always will. Some have been interesting and fun; most not. These days, I write the fun words early in the morning before the adults are up and make me eat my Cream of Wheat.
View all posts by literarylee →
This entry was posted in Garden: A Love Story and tagged canning, chutney, cucumbers, fig jam, garden, gardening, pickles, self-sufficiency, water bath. Bookmark the permalink.